Minecraft, as you may have noticed, has unrealistic but fun physics system. All the solid blocks are not affected by gravity, with exception of gravel and sand. Meanwhile liquids usually flow for the source block in the limited horizontal distance; players can remove this by placing solid blocks in the liquid’s original place or by scooping the liquid into a bucket. 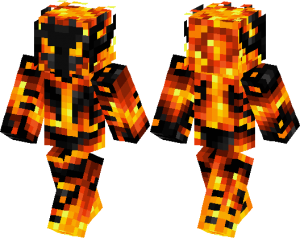 Players also enjoy building complex systems with the help of primitive devices. What adds to the fun is the unique appearance of the avatar through Minecraft Skins from Skindex. The default human avatar is alright but if you can go for an animal in a suit or something much more bizarre then why not?

Minecraft has two separate dimensions aside from the main world namely the End and the Nether. On one hand we have the Nether which can only be accessed through portals built by the player; it can be described as a hell-like dimension with unique resources that can used for travelling in great distances. And on the other we have the End which is basically a barren land that’s made up of numerous islands. The Ender Dragon, which is the boss dragon, can be found on the center island. Minecraft offer four gaming modes namely spectator, survival, creative and adventure and the difficulty level can also be adjusted into five different settings.

A Survival mode can be chosen where players have to collect natural resources like stone and wood; these raw materials are readily available in the environment which you can further craft into blocks or items. Monsters appear in the darker areas outside the player’s radius, depending on the difficulty; players have to build shelters for the night. Survival mode also displays the player’s health bar which decreases every time they sustain an attack.