If you play RuneScape, regardless if it’s on RuneScape Private Servers or the ones developed by Jagex, you have to know the basics of the game. The designs, goals, characters and missions in various servers will differ but the underlying idea is pretty much the same. Players are represented by the avatar of their choice and they can interact with PNCs (non-player characters) or other players when completing missions. 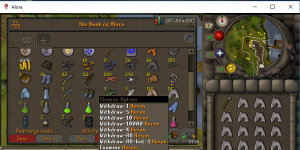 Players are sent to a secluded area at the very beginning of the game, tutorials are always offered if the player need sit. As players go along the game, they’ll realize that it doesn’t have a linear storyline and that they’ll be able to set their own objectives and goals.

There are 27 skills available in the official RuneScape game and all these skills allow the players to do various actions in the game. Whenever players use their skills, they gain experience points. As the level of the skills gradually increases, it becomes easier for players to extract raw materials. The overall skill level of the player weighs in the status of the player in the game. Once the highest possible level of a skill is earned then the player can purchase a cape which symbolizes the achievement.

RuneScape offers a feature called a semi-real-time combat system. Combat is a crucial part of the game that allows the players to beat monsters and obtain the items dropped or to help them complete their quests. Combat levels are clear indicators of just how strong a player of NPC is. Players begin combat by clicking on the opponent and their avatar will automatically attack until one of them is defeated. Majority of the weapons are either fantastical or medieval in nature; the varying weaknesses and strengths of the weapons are clearly displayed.